Scheidt & Bachmann USA is celebrating its 20th anniversary this year. The subsidiary company has seen milestone growth in both its business divisions, Parking and Fare Collections. 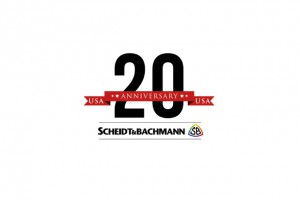 2015 marks an important milestone for Scheidt & Bachmann USA as it celebrates two decades of continued growth in the US Market. The company was formally incorporated in 1995 and established its headquarters in Burlington, MA. Scheidt & Bachmann GmbH created the subsidiary to capitalize on growth opportunities in both the Fare Collection and Parking markets of the US. Since its inception, the company has achieved consistent growth along with a reputation as an industry innovator focused on client satisfaction.

“The key to our success resides in the devotion and dedication of our employees to our clients,” comments John MacDonald, President of Scheidt & Bachmann USA. “This approach combined with our consistent pursuit of innovative solutions has been the foundation of our client partnerships for the last twenty years.”

As a wholly owned subsidiary of Scheidt & Bachmann GmbH, which was founded in 1872, Scheidt & Bachmann USA started with a staff of less than a dozen to currently employing over 160 team members. As part of its factory direct support philosophy, S&B USA has expanded its geographic footprint to multiple service and district offices throughout the United States.

Scheidt & Bachmann USA operates two business divisions, Fare Collection (FCS) and Parking (PH). The Fare Collection Division, which focuses on providing integrated revenue collection solutions for public mass transit, was the first division established. FCS focused its efforts in the early years on projects for the Cities of San Francisco, CA; New York, NY; Portland, OR; and Buffalo, NY. The Parking Division followed shortly thereafter in 1998, offering parking access and revenue control system solutions through its entervo product line to various industry clients including airports, hospitals, universities and municipalities. Phoenix Sky Harbor Airport was the Parking Division’s first project awarded under the USA subsidiary. Today, FCS and PH have extended their portfolio to include projects in more than 26 States in the U.S. and even into Canada.

Scheidt & Bachmann’s U.S history boasts a record of innovations in the respective markets for both divisions. According to Erich Horn, former President of the U.S. subsidiary, he agrees that S&B’s longevity is attributed to the company’s approach to innovation. “Scheidt & Bachmann and its U.S. subsidiary are internally always transitioning,” reflects Horn. “While we do not jump on every trend in the industry bandwagon, S&B has always excelled in analyzing our core strengths and being in the forefront of developing innovative solutions that focus on improving the lives of our customers.”

As the team of S&B USA looks back at its successes over the last 20 years, the company cannot help but look ahead with great optimism to what the future holds. “It is amazing to look back and see our growth path,” reflects Hector Miranda, S&B USA’s first employee. “From the first S&B USA office in Walnut Creek, CA to where we stand today, a lot has grown since then and I feel confident that we have a solid foundation that will take us through the next 20 years and beyond.” S&B is thankful for the contributing team members and the long lasting business relationships that it has developed. Happy Birthday S&B USA!

Scheidt & Bachmann has been a leading international transportation solutions provider since 1872. The family-owned German company operates two of its largest divisions – Parking Systems and Fare Collections Systems – in the U.S. market from its subsidiary headquarter in Burlington, MA. All of the software and hardware equipment are made internally at the S&B factory either in the U.S. or Germany. The company prides itself on maintaining a reputation as the top leader in the industry through its focus on innovation, reliability, flexibility and service.