Washington, DC – July 21, 2015 – In urban communities, an open parking lot not yet ripe for development can be the perfect union of developer and parking operator. As businesses, retailers and residents return to areas once left to rows of parking spaces, parking operators with the open lots that remain rethink how they contribute to a growing community. This growth is prevalent in downtown Washington DC where Imperial Parking Corporation (Impark) operates a 200 space car lot in a neighborhood known as Mount Vernon Triangle. Recently, the lot’s fence line has been turned into a canvas. Painted onto this canvas are herds of deer and swooping hawks into a collaged cityscape of rooftop images for a piece titled “City Fields”. The mural recognizes the changing nature of cities, such as DC, and the incredible possibilities of our future urban fabric. City Fields consists of seven vinyl mesh panels overlaid on more than 160 linear feet of fence line. City Fields flows around the site, not able to be seen in its entirety from a single angle, but rather inviting one to explore and contemplate. The piece was installed on May 18th and will remain for up to six months.

Todd Dengel, a Senior Account Executive for the DC region, and an MVT CID board member and Chair of the Arts and Parks Committee, commented, “As an integral part of communities in which they serve, it is vital for parking companies to be an active participant in that community. This piece is a great step in connecting with an area people work and call home.”

City Fields brings a futuristic vision of how the growth of urban cityscapes might co-evolve and interact with local wildlife species. Using photographs from five major cities around the world, including the Mount Vernon Triangle neighborhood, City Fields weaves together a collage to represent the ever-developing and changing nature of cities and then integrates hand drawings of local wildlife to stir the imagination in considering our urban fabric. City Fields was commissioned and sponsored by the Mount Vernon Triangle Community Improvement District, Boston Properties, Steuart Investment and Impark to be displayed along the fence line of the future 1001 6th Street, NW, a 530,000 square foot office and retail project being developed by Boston Properties and Steuart Investments. The team sought an artist who would create an original and timely piece for the neighborhood that would energize the ‘wall’ of the site fence. Artist Rachel Schmidt recognized that the parking lot site can be likened to an open prairie, a place for herds of creatures to congregate, a moment of rest in the vast city. This concept inspired the direction of her piece. 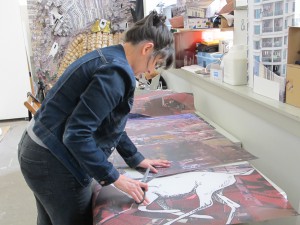 About the Artist Rachel Schmidt received her MFA from the Maryland Institute College of Art, Mount Royal School of Art and her BFA in Textile Design from the University of Kansas. Rachel studied contemporary art and the textile trade in Istanbul, Turkey on a Walters Travel Grant in 2007. Rachel lived and worked in Warsaw, Poland in 2008, where she helped organize an art exhibition of foreign artists in an experimental gallery space. Rachel has exhibits opening at Transformer on May 9th and Flashpoint on June 5th. She is currently an Exhibits Specialist at the Smithsonian Hirshhorn Museum and an Artist in Residence at the Arlington Arts Center. 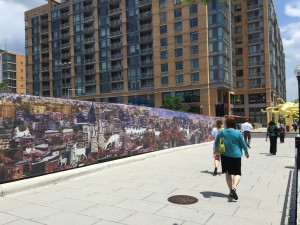