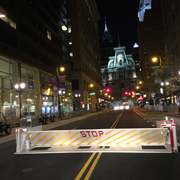 At each location, the totally self-contained MP5000’s were towed into position and controlled vehicle access within 15 minutes. No excavation or sub-surface preparation was required. Once positioned, the mobile barricades unpacked themselves by using hydraulics to raise and lower the barriers off their wheels. DC-powered pumps then raised or lowered the barriers. The shorter mobile deployable vehicle crash barriers carry a K4 rating (M30 per new ASTM rating), stopping 7.5 ton (6400 Kg) vehicles traveling 30 mph (48 kph). The longer MP5000 meets K8 rating requirements, stopping the same sized vehicle at 40 mph (64 kph).

“At almost every major event, from political conventions to G-20 and NATO meetings, Delta’s portable MP5000 barriers are protecting participants from harm,” emphasizes Greg Hamm, Delta Scientific vice president of sales and marketing. “During the Papal visit engagements, which were witnessed by millions, not one vehicle got into position to cause harm.”

Over 1,000 of the MP5000 mobile deployable vehicle crash barriers are being utilized throughout the world. The high security portable barricade system is easily towed into place by a light three-quarter-ton pickup truck. Many of the MP5000s are being used in the Middle East to protect US troops from truck bomb attack.

Both the operation of the barrier as well as deployment and retrieval are push-button controlled. A standard system includes a battery-operated power unit, replenished from either a solar array or local low voltage source. Optionally, a Delta Hydraulic Power Unit operated on a locally supplied power or full manual system, or combination, is available. Both the locally powered and battery powered hydraulic pumping unit can be sized to provide pass-through rates suitable for most inspection and identification station requirements.