Mobile app will steer theatergoers to discounted parking nearby

Icon Parking Systems, New York’s leading parking company, announces that it has signed an exclusive annual advertising contract with Playbill Inc. to be one of the anchor tenants in its newly introduced mobile app, Playbill Passport. 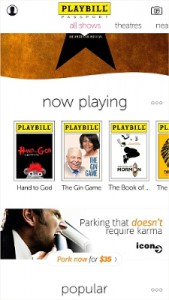 Playbill Inc. is the publisher of the iconic program exclusively servicing all Broadway theatres, and has recently announced a partnership with Broadway Voice Inc. and the launch of its first-ever app called Playbill Passport, a mobile, interactive companion to the classic Playbill magazine. Icon Parking Systems, as one of the anchor tenants, will now be able to exclusively provide Broadway theatregoers that have Playbill Passport and are driving to the theatre, a fully integrated and seamless solution that will take the headaches out of knowing where to park in the theatre district.

The advertising deal will be introduced in phases during 2016. The first phase has already been introduced that includes a full run app advertising program that offers drivers who have Playbill Passport a discounted offer to park in any Icon parking facility in the city. Additionally, Icon is optimizing Playbill Passport’s technology by using its location and proximity-based technology to alert drivers with a push message and discount coupon to park when they are within a one block radius of an Icon garage within the Times Square area. Subsequent phases to be introduced later in the year will incorporate the Icon API giving drivers a complete parking tool within the Playbill Passport user interface that will include maps, directions and reservations.

“Icon is delighted to be partnering with a theater industry legend like Playbill,” said Jerry Skillett, CEO of Icon Parking Systems. “Their Passport interactive app opens a whole new world to the theater experience by leveraging cutting edge technology to deliver an unprecedented experience to the theatre patron. Participating with Passport provides Icon customers easier access to closer Broadway Theatre Parking, a real benefit for those busy Broadway nights. We are excited about this partnership and the potential it holds for New York.”

“Playbill Passport allows us to expand on the services we’ve been offering to Broadway audiences for over 130 years,” said Philip Birsh, President and CEO of Playbill. “Broadway just had its best-attended and highest-grossing year to date. We are in the midst of an exciting theatrical renaissance. Times Square is booming with new businesses, thousands of offerings and no real touchstone to maximize the experience. Theatergoers have come to rely on their Playbill and the information therein for over a century. Playbill Passport will expand on that service by giving audiences a way to learn and interact with the show they are seeing, attend other shows of interest, obtain practical theatre-related information, use discounts, and take advantage of all Times Square has to offer.”

Playbill Passport is currently available in the iTunes app store. An Android edition will be launched in 2016.

Icon Parking Systems is the premier provider of parking services in New York City. The Company has been in business for more than 50 years and operates over 200 parking facilities in virtually all of Manhattan’s most high profile, prestigious neighborhoods and business districts. Icon Parking Systems is on the forefront of providing unsurpassed value to city residents, commuters and visitors to the City’s numerous restaurants, Broadway theatres and concert halls, event destinations, shopping outlets and medical facilities by continuing to deliver affordable parking and prompt and courteous service. For more information, please visit www.IconParking.com.

Since its inception in 1884, Playbill has become synonymous with the legitimate theatre and is an internationally known trademark and symbol of the arts. Playbill Magazine, which can be found in theatres and classical arts venues throughout the country, proudly serves every Broadway house as well as the country’s most prestigious fine arts institutions, including Lincoln Center, Carnegie Hall and the Kennedy Center. In 2016 Playbill presses will roll out 3.5 million programs monthly for nearly 100 theatres in 24 cities. Playbill.com was established in 1994 and has since grown to become the leading source of theatre information on the web and has expanded to a suite of online offerings including Playbill Vault, Playbill EDU, Playbillder, and more. Visit www.playbill.com for more information.