parkbytext, one of Ireland’s leading mobile parking operators, recorded a 20% increase on 2015 transaction numbers to 602,000 transactions for customers parking by text, app, online or over the phone. When considering Visitor Parking and Virtual Permits issued, both of which accounts mainly for staff, residential, and student parking, total parking transactions in 2016 came to over 900,000, or over 2,450 parking transactions per day, an increase of 13% on 2015 figures.

In regards to transaction numbers the busiest day of the year was Monday 12th December, with the busiest location being Luas Red Cow Park and Ride. The most popular duration with customers is for one day’s parking.

parkbytext provides quick, easy and convenient parking payments in over 300 locations across Ireland, such as Luas and Irish Rail locations. The company operates in a further 125 locations across the UK and USA. Registered users increased 40% in 2016, bringing the total amount of registered account holders to over 100,000, across all territories.

Jim Moore, CEO, parkbytext, has said: “2016 has been a good year for us. Customers are more at ease with creating parking transactions on their phone and we’re seeing this with the increase in parkbytext transactions across all locations.

2016 has seen the rollout of our parkbytext 2Bill service to all of our Iarnród Éireann sites, which allows customers to charge the parking amount directly to their mobile phone bill or credit.   Our focus for 2017 is with our customers’ experience across all our channels, with some improvements being rolled out in the coming months.  We are also looking to establish the company more firmly in the UK this year”.

In November 2014, parkbytext™ secured a five-year contract with Transdev, the largest private sector provider of multiple modes of transportation across the globe, to provide managed parking systems in the Park + Ride car parks attached to the Luas, Dublin’s tram system.

parkbytext was a finalist at the 2016 Social Media Awards under the Customer Care Across Social Media category. 2015 saw the company runner up at the inaugural Eir Elevation Fast Company Awards. In addition, the company was selected as a National Champion in the 2013/2014 European Business Awards, being the first Irish finalist from the parking sector in the history of the awards to be given this accolade.  The company was also named in the top Tech100 by Business and Finance in July 2014. 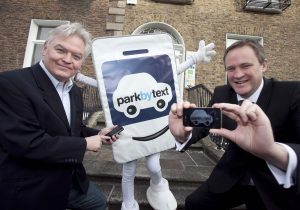