Feb. 1, 2018––In terms of sheer size, a new project in the city of Orange may not be as large as many of the parking structures Bomel Construction has built, but successfully completing the five-level garage in 16 months will be no small feat.

Bomel Construction recently completed shoring and mass excavation and has begun footings for the 608-stall parking structure, located on the former site of a city-owned parking lot and adjacent to the Orange Transportation Center. The construction site is two blocks west of The Circle, the retail heart of the Old Towne Orange Historical District, a one-mile-square area that contains many of the original structures built shortly after the city’s incorporation in 1888. Old Towne was listed on the National Registry of Historic Places in 1997.

The parking structure has a construction cost of $18,404,000. It will be owned by the city and used mostly by Metrolink commuters and visitors to Old Towne. The Orange County Transportation Authority is overseeing construction of the project along with construction management firm Hill International. Choate Parking Consultants is the architect for the plan-and-specs garage. Ficcadenti, Waggoner and Castle is the structural engineering firm.

The cozy construction zone is bordered by Chapman Avenue and a United States Post Office on the south side, Maple Avenue (north) and Lemon Street (east).

Chapman University’s highly regarded Dodge College of Film and Media Arts is just north of Maple. Three small homes built in the early 1900s and several businesses on Cypress Street form the site’s western border. West of Cypress is the Orange Transportation Center, home to an existing Metrolink railway station and an OCTA bus depot served throughout the day and evening by multiple routes.

Old Towne’s charm puts extra pressure on workers who must shoehorn a garage with two subterranean levels into a tight site while not disturbing neighbors close enough to see and hear what is happening every day.

“The project team has placed seismic monitors to measure vibration around the site,” Williamson said. “Before we started, we had to make sure nothing would be damaged while we’re digging and shoring because we’re literally right up against businesses and homes.”

Before Bomel began the 22-foot-deep excavation phase in mid-October, a three-month site remediation phase was completed. Prior to the site being used as a parking lot, it was home for many years to a fruit packing plant and train depot. Williamson said train tracks removed from underneath the site were given to the city, which intends to display them.

When completed, the garage will measure 344 feet by 127 feet by 40-feet tall. In addition to two below-grade levels, there will be one level at grade and two elevated levels. The surface of the lowest parking level will be 22 feet below grade. The structure will have two entrances and exits.

The garage will have a number of architectural embellishments. All elevations will feature orange brick veneer and dozens of precast concrete panels. It will also have 30 window openings.

On the environmental side, Bomel will install a turnkey solar energy system on the top level.

The facility will have about 500 stalls reserved for train riders and more than 100 will be designated for general use, which will more than triple the parking capacity of the 172-space lot it replaces.

There will be three concrete pours for each deck for a total of 12 deck pours. That phase should be done by May. The next part of the schedule has Bomel spending a few weeks installing dozens of precast panels around the entire garage.

“When the panels arrive, we’ll have a 350- to 510-ton crane out in the middle of the street,” Williamson said. “We’ll have a sliver of a lane on Lemon for traffic to pass through. That should be interesting.”

In addition to erecting parking structures of various sizes at mass transit stations in Covina, Fullerton, Irvine, San Bernardino and Tustin, Bomel has a long history of success in Orange, having completed multiple garages for rapidly expanding Chapman University.

“The city of Orange is a very involved customer,” Williamson said. “They’re very helpful in a lot of ways. The residents are very involved, too. They attend city meetings and tell the city how we’re doing.” 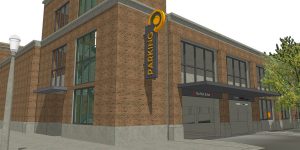 ABOUT BOMEL CONSTRUCTION: Established in 1970, Irvine, Calif.-based Bomel Construction Co. Inc. is widely regarded as the dean of design-build parking structure construction in the West and one of the largest concrete contractors in the United States. It placed 117th on Engineering News-Record’s ranking of the largest specialty contractors in 2017 in the U.S. In addition to its award-winning parking structure experience, Bomel is a one-stop source for all concrete construction needs. The company maintains a highly skilled staff for its in-house structural, architectural and site concrete divisions. Bomel works directly for property owners, developers and general contractors. Its portfolio of work includes a wide range of projects built at well-known casino-resorts, shopping malls, office buildings, mass transit centers, airports, universities and community colleges.