July 18, 2018 – Roseville, Minnesota – Amano McGann, a leader in the parking industry, provides robust solutions for a variety of applications including Multi-Space Meters (MSM) for the on-street market. To bolster support in that sector, Amano McGann is actively hiring and promoting individuals with industry know-how and records of professional distinction.

Dave Witts recently joined Amano McGann as the MSM Regional Sales Manager for the Eastern Coast. He is a 20-year veteran of the parking industry with a solid foundation in the on-street market. He held a variety of hands-on and managerial positions while working with Schlumberger Technologies (now Parkeon). No stranger to Metric products, Dave worked for the company from 2007 through 2012 where he was responsible for all aspects of Metric’s North American division and was a member of their Board of Directors. After his tenure with Metric, Dave joined Creditcall to oversee their North American division. 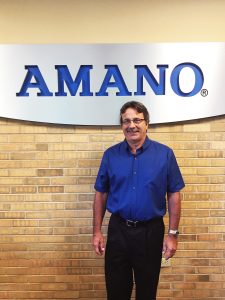 Witts will be responsible for developing and maintaining relationships and growing Amano McGann’s On-Street Division in the Eastern Region. “Dave is a valuable addition to our On-Street team; his experience and knowledge of the industry allows him to hit the street running,” said Amano McGann Vice President of Business Development, Bryan Blackwell.“He will support both Amano McGann branch offices and our dealer partners by exploring opportunities and mentoring staff about the on-street sector.”

Amano McGann, Inc. is a member of the Amano Group, a worldwide organization with annual revenues in excess of $1 billion. As world leaders in the manufacturing and distribution of hardware and software solutions for the parking industry, Amano McGann distributes nationally through branch offices and an Authorized Distribution Network and provides a level of service and experience unmatched in the industry. For more information about Amano McGann’s integrated solutions visit www.amanomcgann.com.