Pittsburgh (PA)– KDKA-TV invited technology lovers and innovative companies alike to the Renaissance Hotel in downtown Pittsburgh last week on September 21st. The local news station hosted “Pittsburgh’s most innovative networking event” – TechnoVation. The event invited the public to “hear from key corporations, city leaders, innovators, and organizations that are working together to lead the way into the future of technology”.

The event was based around a panel discussion with local professionals and experts discussing the rise of technology in pittsburgh as well as its importance to the growth of the city. The panel was hosted by well-recognized KDKA political analyst Jon Delano.

MeterFeeder was invited by Pittsburgh based investor / accelerator Innovation Works to show off the success of a minority-owned startup software company in Pittsburgh. The invitation was sent out by panelist Terri Glueck, the Director of Communications and Community Development for Innovation Works. Innovation Works helps hundreds of startups every year in the Pittsburgh area, with an overarching goal to assist in Pittsburgh’s economic transformation and demonstrate the value of local startups and innovators. MeterFeeder set up a table at the event and educated guests on its pay-by-phone and new pay-by-vehicle products before and after the panel discussion. 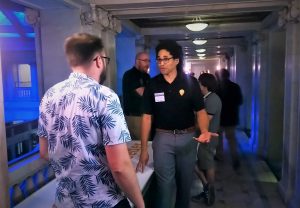