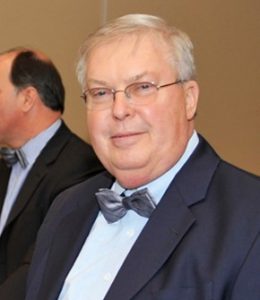 Clarence was born on March 20, 1947 in Lancaster, Pennsylvania.  He was the son of Clarence W. Kemper and Dorothy Kemper (Wolf.) He graduated from Garden Spot High School and, later, Penn State University.  Upon graduation, he enlisted in the United States Air Force. While serving in the Air Force, as a nuclear engineer, he travelled to places such as Okinawa, Japan.

On June 8, 1968, he married Paula Sue Gerhard. He and Paula had two children, Eric and Kristin, while Clarence was stationed in Limestone, Maine.

Upon receiving an honorable discharge from the Air Force, he began a lengthy career in the parking industry which included employment with Cincinnati Time, Amano Cincinnati, Inc. and SKIDATA, Inc.  His career in the parking industry provided him opportunities to befriend and enrich many people’s lives and to live in Maryland, Kentucky, New Jersey and Missouri.  He retired from the industry in December 2015 as General Manager of the St. Louis Trading Area for SKIDATA.

A memorial service will be held on February 8that 2:00pm at Bonhomme Presbyterian Church, 14820 Conway Road, Chesterfield, Missouri.  There will also be a Celebration of Clarence’s Life in Lancaster, Pennsylvania in the summer of 2019. In lieu of flowers, donations may be sent in his name to: The American Cancer Society.