Having previously announced in April that the company had been awarded its second prestigious Queen’s Award for Enterprise in the category of International Trade under its former brand name (ParkCloud), this week saw Managing Director Mark Pegler receive official recognition from HRH The Prince of Wales.

In a reception held at Buckingham Palace, Mark, together with Commercial Director Dr Valentina Moise, joined the UK’s other 128 International Trade winners to celebrate the innovative services being provided by British businesses to countries across the globe.

In addition to the Queen’s Award reception, ParkVia has also been recognised by the International Parking and Mobility Institute (IPMI) this week at its annual conference in Anaheim, California. 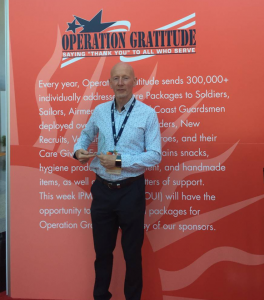 ParkVia was presented with the esteemed industry accolade, having impressed the judges with its thought-provoking campaign surrounding the PARK(ing) Day initiative, which shone the spotlight onto the need to creatively revamp urban parking areas.

Together with European parking operator, Q-Park, ParkVia’s campaign concluded in an eventto showcase the best of the North West’s young artistic talent as part of PARK(ing) Day’s international celebrations in September 2018.

“It has been a very rewarding week for the team, not only being championed by HRH The Prince of Wales, but also being recognised by our industry peers internationally. We’re delighted that the business is growing from strength to strength and it’s extremely gratifying to see the team’s efforts recognised by such prominent awarding bodies.”

The Lord Lieutenant for Greater Manchester will officially present ParkVia with its Queen’s Award for Enterprise trophy in September at its head offices in Manchester.

As Europe’s favourite airport parking retailer, ParkVia is dedicated to connecting the world’s drivers with parking spaces in 42 countries. Its online retail platform allows consumers to book parking as part of their journey, working with both car park operators and travel industry market leaders to ensure that parking is visible at the right time.

Encouraging its philosophy of ‘Choose parking’, ParkVia believes pre-booking is the key element in the travel process, allowing customers to plan in advance and giving them freedom of choice to select the parking product that suits their specific journey type.

Founded in 2008, ParkVia has grown in popularity and reputation over the last 11 years, particularly within the wider airport parking sector. As an established partner for many of the world’s leading international airports, ParkVia is able to maximise visibility for official car parks and ancillary products by covering more points of entry with its targeted marketing expertise.

Today the services of over 2,000 parking providers are promoted to ParkVia’s 3.5m registered users, as well as a large network of partner websites, that includes airlines, travel partners, online travel agents and in-car navigation technology – making it an attractive and lucrative proposition for partners looking to collaborate for white label and in-path projects.