ATHENS, Ga., Jan. 14, 2020  — ParkMobile, the leading provider of smart parking and mobility solutions in the U.S., announced today the launch of service at the University of Georgia’s main campus in Athens. Students and visitors will be able to use the ParkMobile app to easily pay for parking at 2,400 spaces across campus in both lots and decks. 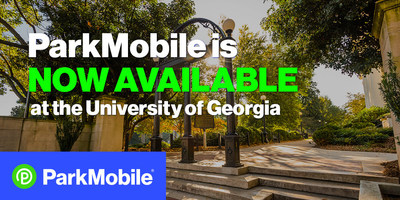 The ParkMobile app is available for both iPhone and Android devices. To pay for parking using the app, a user enters the zone number posted on stickers and signs around the lot, selects the amount of time needed and touches the “Start Parking” button to begin the session. The user can also extend the time of the parking session on their mobile device, without having to go back to the kiosk. The user can even receive a push notification when their time is nearing expiration, so that they may extend their session.

The launch of ParkMobile service at the University of Georgia expands the company’s footprint across the state. ParkMobile is already widely used in Atlanta, Decatur, Roswell, Alpharetta and more. There are currently almost 120,000 users of the ParkMobile app in the state of Georgia and that number has grown 113% over the past two years. ParkMobile can also be used to make parking reservations for events at Mercedes-Benz Stadium, State Farm Arena, Georgia World Congress Center and Bobby Dodd Stadium. Beyond the state of Georgia, ParkMobile is available in most major cities, including New York, Washington, D.C., Pittsburgh, Minneapolis, Philadelphia, and Miami Beach.

“As an Atlanta-based company, we are beyond excited to partner with the University of Georgia,” says Jon Ziglar, CEO of ParkMobile. “There are a lot of UGA alumni who currently work for ParkMobile, so it’s great to see our signs all around Athens.”

ParkMobile, LLC is the leading provider of smart parking and mobility solutions in North America, helping millions of people easily find, reserve, and pay for parking on their mobile device. The company’s technology is used in thousands of locations across the country, including 7 of the top 10 cities as well as college campuses, airports, and stadiums. People can use ParkMobile solutions to quickly pay for on-street and off-street parking without having to use a meter or kiosk. Additionally, ParkMobile offers parking reservations at stadium venues for concerts and sporting events. Reservations are also available in metro area garages, allowing people to drive into the city without having to worry about finding parking. ParkMobile has been named to the Inc. 5000, Deloitte Fast 500, Smart Cities Connect “Smart 50,” and the Atlanta Journal Constitution’s Top Workplaces. Additionally, the company won the 2019 Stevie Awards for Most Innovative Tech Company and Best Travel App. For more information, visit ParkMobile.io or @ParkMobile on Twitter.