In 2019 the Republic of Serbia put the first highway ITS system into operation covering about 200 highway kilometres on the Belgrade – Nis highway in central Serbia. The system of traffic surveillance smart cameras is aimed to improve control and surveillance of highway traffic, reduce accidents with casualties and material losses, and generally improve highway user safety. Additional responsibilities of the ITS system are to detect and sanction oversized vehicles as well as average speed control. 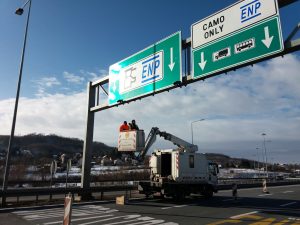 Along the highway, the ITS system has 28 gantry spots with in total 56 installed Tattile Vega Smart 2 HD traffic monitoring cameras – 14 spots from each direction and 2 cameras for every spot. Another part of the entire system is six variable message signs (VMS) which are installed on gantries above all three lanes of the highway and display information from the traffic monitoring cameras about the traffic situation on the highway and at the toll stations ahead.

The system is embedded into a larger project which includes a tolling system on the highway exits. Data generated by the Tattile smart traffic cameras along the highway is shared with the tolling stations. One of them, Plaza Smederevo is already equipped with a Weigh in Motion (WIM) system where measuring of gross and axle weights of vehicles is done without stopping and thus with a minimum influence on traffic flow to maintain a free flow tolling system. The WIM systems are installed on a lane at the Tolling plazas making use of already existent toll equipment, like optical curtains and ANPR (ALPR) cameras, and to potentially be used in future for tolling by weight.

The system operator plans to constantly expand the ITS system across the entire Serbian highway network; and to further improve the system capabilities by adding functionalities such as automatic incident detection algorithms, automatic number plate recognition as well as brand color and class recognition; functions which can be executed by the already installed Tattile Vega Smart 2HD cameras.