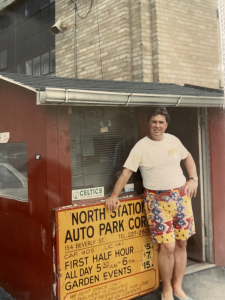 “Jack is a parking guy. Pure and simply put he understands the genetics and math of operating a busy location. He was fair and reasonable as our client for many years with his greatest asset being his friendly and caring personality. He treated every vendor and every client as he does his friends.” …Derek Kiley

Longtime parking professional Jack Aulino passed away over the Christmas Holidays. He was 70.

He relocated to Las Vegas and supervised and trained the valets for the MGM Grand Hotel for three years and then moved to Los Angeles and Held Properties/Parking Plus where he supervised five projects including St. Johns Hospital in Santa Monica. In 1999 he joined Central Parking and for the next seven years ran projects in Los Angeles including Bob Hope Airport and Park One at LAX and in Boston where he was project manager for Prudential Center. When Park One was taken over by Park n Fly Jack remained with them and oversaw the shuttle operations for the company’s San Diego, Oakland, LAX and Ontario locations.

In May 2011, Jack joined ABM Parking Services and became general manager of parking operations for Tampa International Airport Over the next five years he held many positions with ABM in Massachusetts, New Jersey, Pennsylvania and Florida. Jack’s last position was with ABM where he set up and ran the shuttle operation at Bunker Hill Community College in Boston culminating a fifty five year career in the parking industry.

Jack Aulino was the son of the late Alphonse and Rose (Belmonte) Aulino and father of Jacquelyn Aulino, Erica Aulino, and Alexandra Aulino. He was the companion of Marianita Gonzalez. He is also survived by his former wife and mother of his daughters Celeste Ianniciello.