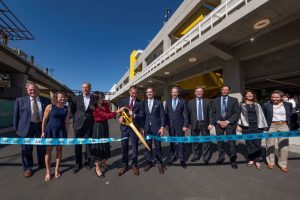 Los Angeles Mayor Eric Garcetti and invited guests cut the ribbon to the LAX Economy Parking facility, which opens to the public Oct. 19.

(Los Angeles, CA) Guests at Los Angeles International Airport (LAX) now have access to one of the most advanced economy parking facilities at any U.S. airport with today’s opening of a $294 million, state-of-the-art parking structure.

LAX Economy Parking, known as the Intermodal Transportation Facility-West during construction, is the first major component of LAX’s $5.5 billion Landside Access Modernization Program (LAMP) to be completed and opened to the public, and will become a centralized hub for ground transportation in the future. The four-story, 1.7-million-square-foot facility has approximately 4,300 new parking stalls for LAX. It features the latest in smart parking technology to create a streamlined parking experience, including pre-booked parking, intuitive wayfinding, electric vehicle chargers and more.

“As the third largest airport in the world, LAX is our gateway to the world — where dreams take flight and we welcome the future of our city with open arms,” said Mayor Eric Garcetti. “LAX Economy Parking is a historic marker of progress in the midst of a once-in-a-generation transformation at the airport — bringing travelers a state-of-art facility that will help reduce congestion, enable our airport to realize its full potential, and continue to create a more seamless travel experience for millions of Angelenos and visitors.”

LAX Economy Parking is the first piece of a complete modernization of the parking experience at LAX. In the near future, all LAX parking structures, including those throughout the Central Terminal Area, will feature smart technology, which will create a more efficient and elevated guest experience. Beginning Oct. 15, guests will be able to make advanced reservations at four structures in the Central Terminal Area (2b, 3, 4 and 7) as well as at the Van Nuys Flyaway terminal garage. Inside, the Parking Guidance System will identify available parking spaces throughout the building on dynamic signage boards, while a Parking Space Indicator System will show available or occupied spaces via overhead lights.

“Today we begin a series of grand openings that will transform LAX into the modern, sustainable, public transit hub our city deserves,” said Councilmember Mike Bonin (District 11). “This milestone is possible because we brought airport neighbors and airport officials together to modernize LAX, reduce its impacts on local communities, and make it a first-class neighbor, opening the door for big improvements to transportation, job creation and environmental benefits. I am thrilled to see this promise being delivered upon for my constituents, Angelenos and future visitors to our vibrant city.”

Utilizing LAX’s new online parking reservation system at parking.flylax.com, travelers can now pre-book a parking spot for a discounted rate, guaranteeing a place to park. The system includes technology that allows for automatic entry and exit at the gate.

Online pre-booking will offer a parker the greatest discount compared to the drive-up rate of $25 per day, with initial discounts up to 70% off pre-book rates. The earlier a parker pre-books, the greater their discount. LAX Economy Parking rates are also dynamic and based on availability.

“The new economy parking lot is the first of many improvements that will completely transform the passenger experience at LA,” said Councilmember Joe Buscaino (District 15). “With the new lot, along with the connection to the Metro rail system, the automated people mover and the revamped FlyAway program, residents of all income levels will have options for getting to and from the airport, and will no longer have to choose between convenience and affordability.”

A dedicated shuttle bus will transport parkers between the facility and the LAX Central Terminal Area, where a dedicated inner bus lane on the Arrivals/Lower Level will provide quick access to and from the airport away from regular traffic. Once the Automated People Mover (APM) train is operational, passengers will connect to the train system on the second floor of the Economy Parking facility via two pedestrian bridges linking the building to the train station.

“The opening of LAX Economy Parking is an momentous achievement, the first element in our multi-billion-dollar transformation that will forever change how Angelenos and visitors get to, from and around our airport,” said Beatrice Hsu, President, BOAC. “This innovative facility is an integral addition to our airport parking, and will provide a convenient and affordable place to park, while elevating the guest experience at LAX.”

“Today is a truly historic day for LAX and Los Angeles as we unveil this state-of-the-art facility, which showcases how we are creating the world-class airport our City deserves,” said Justin Erbacci, CEO, LAWA. “Building a better LAX is more than just bringing state-of-the-art facilities online – it’s about how we build, and we are proud that this facility rose from the ground with the help of more than 3,700 craft workers and nearly 850,000 work hours over the last several years. It truly is a testament to our partnership with the building trades to use local, skilled labor as we transform our airport.”

LAX Economy Parking is a sustainable facility, in alignment with LAWA’s Sustainability Action Plan, “Boldly Moving to Zero.” In addition to smart parking technology that helps reduce vehicle idling, the facility is outfitted with a multitude of electric vehicle (EV) chargers. A total of 500 Level 2 and eight DC-fast (Level 3) chargers will be installed and operational in the first year. As a whole, the building incorporates infrastructure for nearly 1,600 parking stalls to have EV charging capabilities.

The building is designed in the mid-century modern aesthetic, aligning with the overall design theme of LAX. The open-air rooftop of the facility offers amazing plane spotting views, as the building sits just under the flight path for the north runways.

LAX also announced the first public art commission award for the LAMP. In coordination with the City of Los Angeles’ Department of Cultural Affairs (DCA), Sadie Barnette was selected by the LAMP Art Committee to design a permanent, site-specific artwork for the new plaza at the future ground transportation hub. Barnette is from Oakland, CA, holds a BFA from California Institute of the Arts and an MFA from the University of California, San Diego, and is represented by Charlie James Gallery in Los Angeles and Jessica Silverman in San Francisco.

Barnette’s proposed artwork for the plaza is brightly colored terrazzo lettering that spells out the welcoming message, “Sister You Are Welcome Here,” which also serves as the title of the work. The warm, inviting statement is an expression of civic hospitality, broadcasting that LAX welcomes the world to Los Angeles. The positive greeting carries multiple meanings that expand to ideas of migration, transitions and diversity. Featuring bold colors and a playful font, the sentiment will create a memorable meeting spot to welcome visitors to Los Angeles, while also signaling the comfort of home for locals returning from travel. The artwork is expected to be completed in 2024.

The LAWA Security and Badging Office, which is currently located on the far west side of the airport off Pershing Drive and World Way West, also will be housed inside the facility in the future. This move will allow employees to utilize public transportation and the future APM to take care of their badging needs, helping to further reduce vehicle traffic on the surrounding roads and neighborhoods.

The Board of Airport Commissioners awarded the design-build contract to Swinerton Builders on July 11, 2018, with Watry-Gensler comprising the design team. The facility broke ground exactly one year later on July 11, 2019, on the grounds of what was formerly known as Economy Lot C.

During the course of the contract with Swinerton Builders, 3,781 total craft workers assisted with building the new facility, earning more than $54 million in total wages. Of these workers, 1,136 or 30.04% were local workers. A total of 848,501 hours were performed by craft workers on the contract.

**Firms may be certified in multiple categories

The other components of LAX’s LAMP include the APM, a 2.25-mile elevated guideway train system with six stations total – three inside the Central Terminal Area and three outside, a Consolidated Rent-A-Car facility, the long-awaited connection to the regional transit system and roadway improvements.

LAX, the third-busiest airport in the world and second busiest in the United States in 2019, is in the midst of a $14.5-billion capital improvement program that will touch on all nine passenger terminals and build new facilities, including an Automated People Mover (APM) train, Consolidated Rent-A-Car (ConRAC) facility and a 12- to 15-gate Bradley West Gates addition to the Tom Bradley International Terminal.

LAX is part of a system of two Southern California airports – along with Van Nuys general aviation – that are owned and operated by Los Angeles World Airports (LAWA), a proprietary department of the City of Los Angeles that receives no funding from the City’s general fund.

LAWA is also a leader in inclusivity, operating eight programs that provide opportunities for business enterprises including local, small, minority-owned, veteran-owned and disadvantaged firms, and working together with community partners to offer the HireLAX Apprenticeship Readiness Program, which targets local workers to make them ready for rewarding careers in the construction trades, and the Build LAX Academy, designed to prepare small contracting businesses for success when working on projects at LAX.

LAX was named a top-10 U.S. airport by SKYTRAX in 2018, and was honored as the “Most Innovative Airport for Passenger Experience” in 2019 by the American Association of Airport Executives. LAX is the second-most popular airport in the world to appear on Instagram, according to wego.com. Other recent honors have included selection as the No. 9 Best Airport (Wall Street Journal); No. 7 Best On-Time Performance for a Mega-Hub Airport (OAG); one of “The World’s Best Airports for Business Travelers” (GlobeHunters); Public-Private Partnership of the Year (P3 Bulletin); Urth Caffe, Best Airport Coffee Concession of the Year (Global FAB Awards); Innovation of the Year, Consolidated Rent-A-Car Facility (ARTBA); Best Project, United Airlines Terminal 7 and 8 Redevelopment Program (Engineering News Record California); North American Public-Private Partnership Deal of the Year (IJ Global); and Innovative Transportation Solution of the Year, Automated People Mover (WTS LA).

As a covered entity under Title II of the Americans with Disabilities Act, the City of Los Angeles does not discriminate on the basis of disability and, upon request, will provide reasonable accommodation to ensure equal access to its programs, services, and activities.  Alternative formats in large print, braille, audio, and other forms (if possible) will be provided upon request.