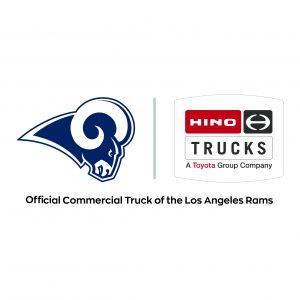 October 9, 2019 – Hino Trucks is stepping into the NFL arena again to announce an additional partnership with an NFL team – the Los Angeles Rams. As the Official Commercial Truck of the Los Angeles Rams, Hino will work with the Rams to carry out their mutual goal of creating an authentic experience for their fan bases in Southern California. Hino will have an in-stadium presence during games as well as across Rams media platforms throughout the year.

“We are thrilled to team with Hino Trucks and their dealers across Southern California to bring their customers closer to Rams football,” said Jason Griffiths, Rams VP of Partnership Sales. “Hino Trucks is an industry leader and their focus on delivering an unparalleled customer experience aligns with how we approach game days and beyond. We look forward to working with them this season.”

Local Hino Trucks dealers representing the Southern California Dealer Association are participating in and supporting the partnership. The dealer locations included are:

“Hino Trucks and our Southern California Hino Dealerships are proud to partner with the Rams during their last season at the historic Coliseum,” said Glenn Ellis, Sr. Vice President, Customer Experience. “It’s a tremendous honor to partner with an organization like the Rams, who are as committed to winning and providing their customers with an ultimate experience, as we are at Hino Trucks. We share the same convictions that the Rams have for their diverse community and fan base. This partnership reaches off the field and brings together two brands dedicated to climb to new heights.”

About the Los Angeles Rams:

The Los Angeles Rams – Los Angeles’ original professional sports team – stand as one of the oldest franchises in the National Football League and since its founding in 1937, have garnered three World Championships and sent 29 of its members to the Pro Football Hall of Fame. As a professional sports team, the organization is committed to being a valuable civic partner and serving the greater Los Angeles area 365 days a year. For more information visit www.therams.com and follow the Rams on Facebook and Twitter, @RamsNFL.

Hino Trucks, a Toyota Group Company, manufactures, sells, and services a lineup of Class 4-8 commercial trucks in the United States. Hino Trucks is the premier heavy & medium duty nameplate in the United States with a product lineup that offers fully connected vehicles with low total cost of ownership, superior fuel economy, unmatched reliability and maneuverability and the most comprehensive bundle of standard features in the market. Headquartered in Novi, Michigan, Hino has a network of over 230 dealers nationwide committed to achieving excellence in the ultimate ownership experience. Learn more about Hino Trucks at http://www.hino.com or follow us on Facebook, Linkedin, Twitter and YouTube.