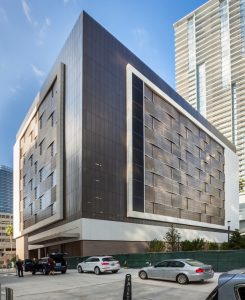 “For more than 15 years, Moss has seen firsthand and been part of Brickell’s renaissance,” said Moss Construction CEO Scott Moss. “It was a pleasure to work with the Elm Spring team, and to continue to be a part of Brickell’s changing skyline.”

Designed by HOK, the garage consists of a twelve story above grade parking garage and one below grade basement level valet garage. Built adjacent to the existing 600 Brickell World Plaza Tower, the two structures are connected at basement level under the existing active private drive. The façade of the garage features an exterior cladding system, made of precast architectural concrete panels and undulating perforated metal panels which are back lighted by color changing LED lights.

The thirteen-level garage structure contains 474 parking spaces located between the basement and eleventh levels. The garage will also feature a 7,000 sq. ft. restaurant space on the first level, 8,600 sq. ft. of retail space available on the 1B (Mezzanine) level and a plaza featuring green and hardscape spaces.

Moss (www.mosscm.com) is a national privately held construction firm providing innovative solutions resulting in award-winning projects. With regional offices across the United States, Moss focuses on construction management, design-build and public-private partnerships. The company’s diverse portfolio encompasses a wide range of sectors, including luxury high-rise residential, landmark mixed-use developments, hospitality, K-12 and higher education, justice, solar energy and sports. Moss is ranked by Engineering News-Record as one of the nation’s top 75 general contractors. Moss prides itself on a strong entrepreneurial culture that honors safety, quality, client engagement and employee development. Its employees consistently rank Moss as one of the best places to work.